China and the Solow Model

China's rapid, but decelerating, growth is broadly consistent with the implications of the classic Solow growth model we teach our intermediate macroeconomics students.  This model predicts that low-income countries should grow quickly, but growth will slow down as they approach the leading countries, whose per-capita growth is constrained by the rate of technological progress. That is, there should be "convergence" in per capita GDP.

As this chart from the letter shows, China is following a similar path to Korea and Japan. 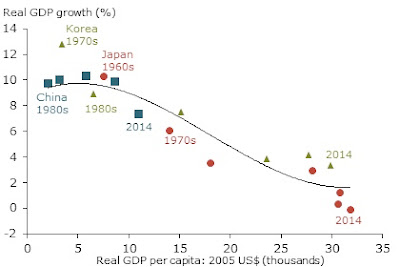 The basic intuition from the model comes from the idea of diminishing marginal product of capital - i.e., where capital (machinery and equipment) is scarce, the increase in output from adding an additional unit is greater than where it is already abundant.  This diagram of output per capita (y) as a function of capital per capita (k) illustrates,

where the slope is the marginal product of capital (MPk).

The idea can be extended to include "human capital" (i.e., knowledge and skills), as Mankiw, Romer and Weil did in a 1992 paper.

While the Solow model gets the broad contours of the growth experiences of Korea, Japan and (it seems so far) China correct (and does pretty well for the US as well), it does miss a couple of big things:

(1) A diminishing marginal product of capital implies that the financial rewards to investing in a low income country should be vastly higher than in high-income countries.  In a world where people can invest across borders, this implies a huge incentives for financial flows from high-income to low-income countries, but we do not observe such large net flows.  This was the puzzle Robert Lucas noted in a 1990 paper.

(2) While the experiences of some low-income countries is consistent with the convergence hypothesis; in many cases, low-income countries have fallen further behind (or, as Lant Pritchett wrote, "Divergence, Big Time.").  From the standpoint of the Solow model, growth "miracles" like those of Korea are to be expected, and the real puzzle is the fact the failure of so many countries to converge.

As Moses Abramovitz pointed out in 1986, it is usually a subset of the low-income countries that are growing fastest.  This would suggest there are forces for convergence, but something is preventing them from applying everywhere.  Current thinking is that the answer lies in "institutions" - the set of legal rights, culture, and governance which shape the economic environment and incentives for people to take actions within it, including to accumulate capital.

This is where assuming that China will continue to follow in the convergence footsteps of Korea and Japan may be questionable.  While China's institutions have gotten it this far, there are reasons to doubt whether they are appropriate for achieving levels of GDP per capita comparable to Korea, Japan and Europe, as this column by Brad DeLong and this by Eduardo Porter discuss.  That said, the institutions in the US during its late 19th century industrialization were hardly what an economist would recommend (in particular, corruption was rampant), and yet it somehow managed to take over leadership in per capita GDP from Britain.
Labels: china, growth

Would it be helpful to confirm the 2014 point to have some recent data in a time of full employment on a more-or-less global basis?

This already interesting post would be even more so with more analysis of Chinese economic history. Thank you so much.

Thanks for the comments; John, more data is always better, but its not really possible statistically to discern the difference between a "cyclical" downturn versus a change in a long term trend until long after the fact.

Yes, Bill, it's a bummer that it takes time. I ask because there seems to be a trend out there to "define normal down", as perhaps Moynihan might put it. Potential output. Secular stagnation. Unemployment rate. Normalization. Utilization. Yet the coincident circumstance is a gap down in demand, which has not been replaced, or even really tried to be replaced except perhaps by China. It makes perfect sense to me that we can define a new normal, depressed equilibrium, that will last long enough for the data to prove it out. But it sure seems there should be an asterisk, *subject to insufficient demand replacement.

Corruption is a rather good growth instrument when directed to productive investment (case of the US XIXth century) whereas corruption linked to outbound capital flows and unproductive rents is signal of inefficient policy.

Thanks - yes the "corruption is bad" story is too simple!