Hysteresis in a New Keynesian Model

I've posted a draft of my research paper, "Hysteresis in a New Keynesian Model" on my website.  The paper proposes a way of modelling hysteresis and integrates it into a New Keynesian macro model. 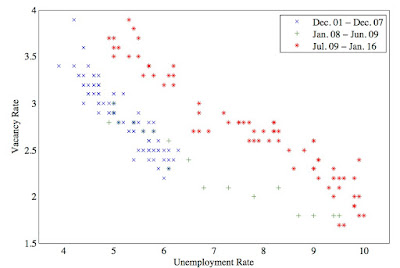 In the paper, I argue that less-efficient matching is related to the increased duration of unemployment spells seen during the last recession and its aftermath.  There are several reasons why matching may be less efficient with a higher proportion of long-term unemployed:
I cite empirical evidence for (2) and (3) in the paper.   The paper does not take a stand on the mechanism causing the relationship between matching efficiency and duration of unemployment.

The model includes a Diamond-Mortensen-Pissarides search-and-matching labor market framework, where hires (H) are a function of the number of vacancies (V) posted by firms and unemployed (U) workers

Hysteresis is modeled with the assumption that matching efficiency (A) is a decreasing function of the average duration of unemployment spells.

Rearranging the matching function to solve for efficiency (and setting alpha to 0.5), we can see that a decrease in efficiency coincides with the increase in the duration of unemployment spells 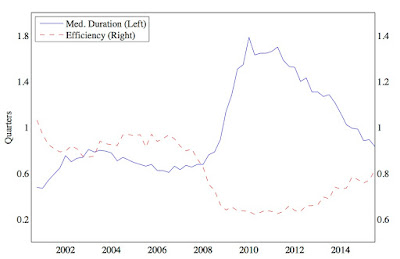 With hysteresis, the response of unemployment to a negative productivity shock is smaller initially but more persistent, as shown by the impulse response functions: 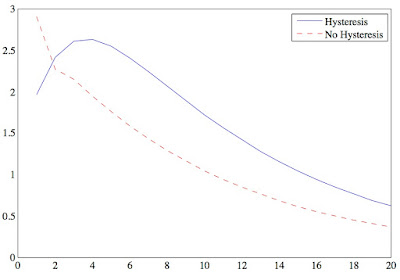 The reason for this is that, in the absence of hysteresis, firms can adjust their labor by sharply decreasing their vacancy posting.  With hysteresis, the response of vacancies is less dramatic because firms take into account the fact that hiring will be more difficult in the future due to the decline in matching efficiency.

The model also considers demand shocks, which take the form of shocks to the discount factor, and monetary shocks (deviations from the Taylor rule), with similar results.  Overall, hysteresis acts as a mechanism that increases the persistence of the response of macroeconomic variables to shocks.  Since macro models struggle to generate endogenous persistence, this may be one of the main selling points of the paper.

Hysteresis also generates movements in the "natural rate" of unemployment, which I proxy by computing the amount of unemployment that would occur if wages and prices were flexible, taking as given the evolution of matching efficiency (A) from the baseline model.  The green line shows the change in the natural rate in response to a negative productivity shock: 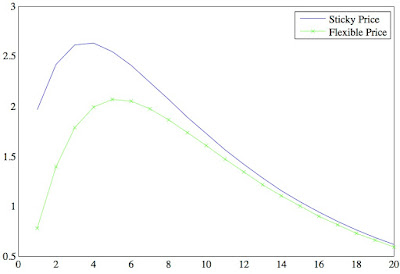 Note: this is a revised version of the draft circulated last fall as my "job market paper".
Labels: macroeconomics Links to this post 4 comments: