A Trigger for the "Fiscal Cliff"

Under current law, taxes will rise significantly and government spending will be cut next year.  This scenario has been called the "fiscal cliff" and the CBO recently estimated it would lead to a recession in early 2013.

In the Hartford Courant, I suggest going over it, but gradually, when the circumstances are more favorable:


The tax increases could be made to occur at a more appropriate time by instituting triggering criteria that would delay them until the state of the economy has improved and then phase them in. For example, the tax changes could be set to begin once the unemployment rate has fallen to a more reasonable level, like 5.5 percent, and remained there for six months. At that point, the increases could occur in three or four steps, with each one occurring as long as the unemployment rate has remained below a specified level for six months.

This would minimize the risk of pushing the economy back into recession by waiting until the economy has recovered enough to bring the unemployment rate down to a level more consistent with a healthy economy. It would also create confidence that the U.S. is not headed for a debt crisis (though low interest rates suggest that financial markets are not worried about this now). An automatic trigger would take the guesswork out of deciding on an appropriate time frame for an extension of the tax cuts, and spare the country further political brinksmanship over renewing them again.

This is another form of "state contingent" fiscal policy that I've suggested previously on this blog.

In the piece, I asserted that allowing the 2001/03 income tax cuts and the 2010 temporary payroll tax cuts to expire would generate revenue "roughly consistent with the amount of spending required to maintain current programs." This is based on the idea that this would be pretty close to the "extended baseline scenario" in the CBO's projections where the US debt-to-GDP ratio gradually declines over time.  As Jared Bernstein notes, the implication is that the US can afford its current entitlement programs, if it allows scheduled tax increases to take place.

In addition to the tax increases - essentially a reversion to the tax code at the end of the Clinton administration (we did pretty ok back then, didn't we?) - the "fiscal cliff" scenario also involves some spending cuts under the "sequester" mandated by last summer's debt ceiling deal.  Since I was trying to keep the piece to op-ed length, I focused on the tax part because it is larger, but similar logic could be applied to the spending aspects.

The argument is not that this is an ideal economic policy - I'd like to see more stimulus now, and a simpler, more progressive tax code in the long-run; others would like cuts to entitlement programs and lower taxes - but rather that, as a modest change to existing law, it might be a politically feasible alternative to unrealistic hopes of a fiscal "grand bargain" that can achieve a "not bad" outcome in the short- and long-run.
Labels: fiscal policy, taxes Links to this post 1 comment:

Hans-Werner Sinn is for Hanging Separately. Is Germany?

In a NY Times op-ed attempting to explain "Why Berlin is Balking on a Bailout" Hans-Werner Sinn writes:

Even a European nation, however, should not socialize debt, a lesson demonstrated by the United States in the 19th century.

When Secretary of the Treasury Alexander Hamilton socialized the states’ war debt after the Revolutionary War, he raised the expectation of further debt socialization in the future, which induced the states to over-borrow. This resulted in political tensions in the early 19th century that severely threatened the stability of the young nation.

Every American schoolkid learns that Ben Franklin said "we must all hang together or assuredly we shall all hang separately." The point is that the we succeeded by hanging together.  Sinn somehow manages to draw the opposite lesson.  Wow.

The more widely-held (until today, I would have said "universally") view is that Hamilton's plans - which faced a great deal of opposition at the time - helped establish the creditworthiness of the United States and provided a foundation for its financial and economic development. Bob Wright and David Cowen, in Financial Founding Fathers explain:

The positive effects of funding and assumption of the debt upon not only the country's credit standing but also its commerce were felt almost immediately. Writing from Hartford in 1791, Noah Webster, the "schoolmaster of America," boasted about the era of prosperity brought on by assumption. "The establishment of funds to maintain public credit," he noted, "has an amazing effect upon the face of business and the country." "Commerce," he continued, "revives and the country is full of provision. Manufactures are increasing to a great degree, and in the large towns vast improvements are making in pavements and buildings."

Moreover, Europe's capital markets magically opened to the United States. As early as March 1791, United States securities were selling from 1 to 40 percent above par in Europe. In November 1791, European-based broker John Fry assured Hamilton that American credit overseas was secure and that European funds would stabilize securities prices. "The American Funds," Fry claimed, "had inspired no Confidence in this market 'til they had acquired a high price at home & three months ago a sale of them must have been effected here with the greatest difficulty." "The Case is now so materially alter'd," he wrote, "that one friend of mine has bought & sold near a Million of Dollars." Fry noted that Europeans at that time had more money than local investment opportunities and were looking to employ their capital in the United States. In short, Americans were able to borrow money in Europe at between 3 and 6 percent and use it to fund projects that returned 10, 15, even 20 percent per year.

That is, Hamilton's plan for the national debt mostly worked out pretty well and is a good example of something that was controversial at the time but vindicated by history.

I really hope Sinn's view isn't representative of German opinion.  If it is, we're in way more trouble than I realized.
Labels: europe, history Links to this post No comments: 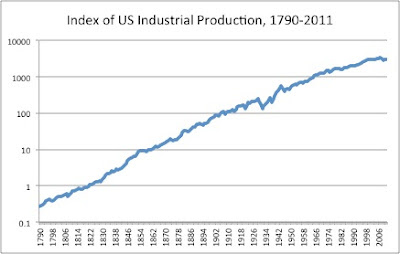 
The prevailing world depression, the enormous anomaly of unemployment in a world full of wants, the disastrous mistakes we have made, blind us to what is going on under the surface - to the true interpretation of things.  For I predict that both of the two opposed errors of pessimism which now make so much noise in the world will be proved wrong in our own time - the pessimism of the revolutionaries who think that things are so bad that nothing can save us but violent change, and the pessimism of the reactionaries who consider the balance of our economic and social life so precarious that we must risk no experiments.

The Subordination of Economic Theory to Society


Europe, however, has always found it difficult to come to terms with an over-confident, let alone arrogant, Germany. The current political turmoil in Europe shows that, regardless of how sensible Chancellor Angela Merkel’s austerity prescriptions for debt-ridden peripheral Europe might be in the abstract, they resemble a German Diktat. The concern for many is not just Europe’s historic “German problem,” but also that Germany could end up exporting to the rest of Europe the same ghosts of radical politics and violent nationalism that its economic success has transcended at home.

Once the crisis became a sad daily reality for millions of unemployed – particularly for what appears to be a lost generation of young, jobless Europeans – EU institutions also became a target of popular rage. Their inadequacies – embodied in a cumbersome system of governance, and in endless, inconclusive summitry – and their lack of democratic legitimacy are being repudiated by millions of voters throughout the continent.

Europe’s experience has shown that the subordination of society to economic theories is politically untenable. Social vulnerability and frustration at the political system’s failure to provide solutions are the grounds upon which radical movements have always emerged to offer facile solutions.

The euro project was driven by politicians and businessmen - not economists - from the outset.  In terms of economic theory, giving up autonomous monetary policy is highly problematic, especially in the absence of fiscal union and when labor mobility is limited.

Moreover, according to economic theory, the "austerity prescriptions" are anything but "sensible."   Economic theory says that these policies are pro-cyclical (i.e., exacerbate the current economic slump) and that the adjustment of economic imbalances through "internal devaluation" is extremely painful.

The underlying motives for the push for austerity in Europe are largely political.  I cannot claim to have any insight about domestic politics in Germany, but the last several years in the United States have demonstrated that interventions grounded in basic economic ideas - counter-cyclical fiscal policy, expansionary monetary policy, and "lender of last resort" financial interventions - can be deeply unpopular.  Even though these policies can deliver what appears to be a (nearly) "free lunch," they are profoundly unappealing to the instinct and intuition of voters.  What the voters ("society") seem to want are economic policies that reward virtue and punish profligacy (last year, Stephen Gordon nicely observed a parallel between German attitudes and the US "Tea Party").

The headline numbers from the BLS' May employment report are disappointing.  Employment only rose by 69,000, which is short of the rate needed to keep pace with population growth and technological progress, and the unemployment rate ticked up to 8.2%. 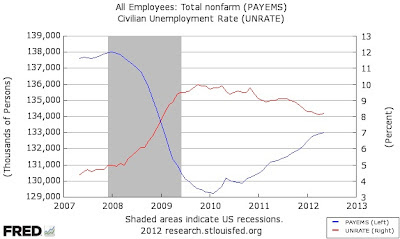 Although the payroll employment number rightly gets higher billing because it comes from a survey of businesses which has a larger sample, its worth noting that the numbers from the survey of households were a bit more encouraging.  According to the household survey, 422,000 more people were employed in May than April, and the reason the unemployment rate rose is that there was an even bigger increase in the labor force, partly reversing the decline in labor force participation.

On a non-seasonally adjusted basis, the unemployment rate in May was 7.9%, up from 7.7% in April, and employment rose by 789,000.  That is, May is normally a month with big jumps in both employment and the labor force, which are removed by the seasonal adjustment.
Links to this post No comments: