Warming Up the Helicopter

In his speech at the Jackson Hole conference, Ben Bernanke acknowledged that the economy isn't growing fast enough:

Although output growth should be stronger next year, resource slack and unemployment seem likely to decline only slowly. The prospect of high unemployment for a long period of time remains a central concern of policy. Not only does high unemployment, particularly long-term unemployment, impose heavy costs on the unemployed and their families and on society, but it also poses risks to the sustainability of the recovery itself through its effects on households' incomes and confidence.

Bernanke methodically weighed several ideas that have been circulating about how the Fed could give the recovery a push (see e.g., Joseph Gagnon and Alan Blinder).
Overall, the Fed is ready to do more if necessary and they are not going to let a Japanese-style deflation (a.k.a. "it") happen here:

[T]he FOMC will strongly resist deviations from price stability in the downward direction. Falling into deflation is not a significant risk for the United States at this time, but that is true in part because the public understands that the Federal Reserve will be vigilant and proactive in addressing significant further disinflation. It is worthwhile to note that, if deflation risks were to increase, the benefit-cost tradeoffs of some of our policy tools could become significantly more favorable.

Second, regardless of the risks of deflation, the FOMC will do all that it can to ensure continuation of the economic recovery. Consistent with our mandate, the Federal Reserve is committed to promoting growth in employment and reducing resource slack more generally. Because a further significant weakening in the economic outlook would likely be associated with further disinflation, in the current environment there is little or no potential conflict between the goals of supporting growth and employment and of maintaining price stability.

Although many of us think there is no need to wait and see if "further action should prove necessary" (e.g. Mark Thoma) the speech should be somewhat reassuring to those, like Paul Krugman, who argue the Fed is in denial (but he is not reassured).

That is, even more slowly than lento (slowly)...

The BEA's second estimate revised the growth rate of real GDP in the second (April-June) quarter to 1.6%, down from the previous 2.4% "advance" estimate, and slower than the 3.7% growth rate in the first quarter. 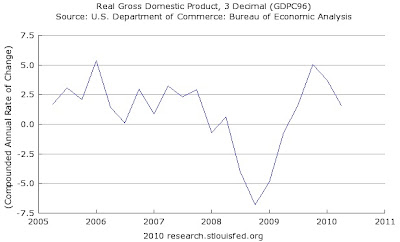 While still positive - i.e., consistent with a "recovery" - that growth rate isn't fast enough to keep unemployment from rising over time, i.e., its not recovery that feels like a recovery.

The less-bad news is that much of the downward revision came from two sources:
Calculated risk has a nice table comparing the advance to the second estimate. The third estimate is due September 30.
Labels: macroeconomics Links to this post 1 comment:

Keynes on the Science and Art of Economics

Economics is the science of thinking in terms of models joined to the art of choosing models which are relevant to the contemporary world.

That comes to my attention via David Colander, "The Death of Neoclassical Economics" (HT: Frances Woolley).
Labels: Keynes, methodology Links to this post 1 comment:

Going for the Permanent Semi-Slump

“In judging how we approach this recovery, it seems to me that we need to be careful not to repeat those policy patterns that followed the recessions of 1990-91 and 2001,” he said. “If we again leave rates too low, too long, out of our uneasiness over the strength of the recovery and our intense desire to avoid recession at all costs, we are risking a repeat of past errors and the consequences they bring.”

As a general rule, whenever you hear special-interest groups using near-hysterical language to warn that some proposal will destroy jobs, snuff out innovation and end free-market capitalism as we know it, you can generally assume that progress is being made.

The rest of his Washington Post column is about internet regulation.
Labels: politics Links to this post No comments:

In his Times column, Paul Krugman applies Ben Bernanke's 1999 critique of the Bank of Japan to the Fed today. He writes:

At the time, the Bank of Japan faced a situation broadly similar to that facing the Fed now. The economy was deeply depressed and showed few signs of improvement, and one might have expected the bank to take forceful action. But short-term interest rates — the usual tool of monetary policy — were near zero and could go no lower. And the Bank of Japan used that fact as an excuse to do no more.

That was malfeasance, declared the eminent U.S. economist: “Far from being powerless, the Bank of Japan could achieve a great deal if it were willing to abandon its excessive caution and its defensive response to criticism.” He rebuked officials hiding “behind minor institutional or technical difficulties in order to avoid taking action.”

Who was that tough-talking economist? Ben Bernanke, now the chairman of the Federal Reserve. So why is the Bernanke Fed being just as passive now as the Bank of Japan was a decade ago?

Krugman has more - including a link to Bernanke's paper - in this blog post.

The Fed does seem to be overly-cautious, though its recent decision not to contract its balance sheet as planned is a baby step in the right direction. It could be worse: as new FT econ blogger Gavyn Davies explains, the Fed and Bank of England have been much more aggressive than the "hard currency mob" at the European Central Bank and (still) the Bank of Japan.

I'd say "treading water," but I think that implies that one's head is above the surface...

According to the latest from the BLS, employment fell by 131,000 in July. Private-sector payrolls increased by 71,000, but the government shed 202,000 jobs (143,000 of which were temporary census workers). The unemployment rate held steady at 9.5%, mainly because labor force participation ticked downward again. 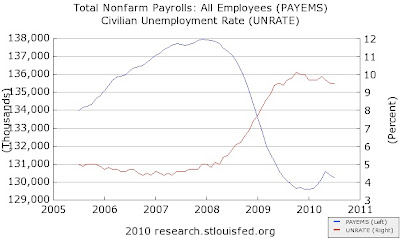 The 48,000 decline in state and local government employment reminds us why the state aid bill that just passed the Senate is necessary (but insufficient!).

As always, Economix has a good write-up; Calculated Risk has nice pictures, and RTE has a roundup of Wall Street reaction. On the politics, Ezra Klein asks "what is the White House thinking?"
Labels: macroeconomics Links to this post 1 comment:

Summary of the Social Security and Medicare Trustees' annual report, 2010: 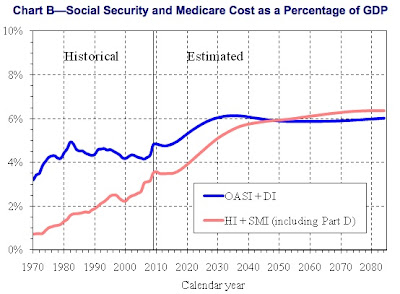 That looks much better than the same chart last year: 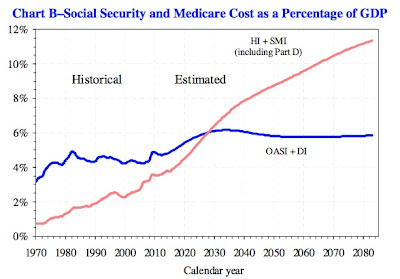 The difference is due to the health care reform bill passed earlier this year (the Affordable Care Act, or ACA), as this year's report explains:

Much of the projected improvement in Medicare finances is due to a provision of the ACA that reduces payment updates for most Medicare goods and services other than physicians’ services and drugs by measured total economy multifactor productivity growth, which is projected to increase at a 1.1 percent annual rate on average. This provision is premised on the assumption that productivity growth in the health care sector can match that in the economy overall, rather than lag behind as has been the case in the past. This report notes that achieving this objective for long periods of time may prove difficult, and will probably require that payment and health care delivery systems be made more efficient than they are currently. To facilitate this outcome, the ACA establishes a broad program of research on innovative new delivery and payment models to improve the quality and cost-effectiveness of health care for Medicare — and, by extension, for the nation as a whole. The improvement in Medicare’s finances projected in this report highlights the importance of making every effort to make sure that ACA is successfully implemented. If health care efficiency cannot be substantially improved through productivity gains or other measures, then over time the statutory Medicare payment rates would become inadequate. In that situation, the payment update reductions might be suspended, in which case actual long-range costs would be larger than those projected under current law.

That's what President Obama and other reform advocates meant by "bending the curve." If it holds up over time, it represents a huge step towards improving the government's long-term financial picture - i.e., the health care reform bill was a tremendous act of "fiscal responsibility."

The other takeaway from the chart is that, in general, the fiscal situation of the main "entitlement" programs isn't nearly as dire as some would have you believe. Social Security looks to level off at roughly 6% of GDP, which is quite manageable, and now, thanks to the reform, Medicare may do the same.
Labels: fiscal policy, health care Links to this post 3 comments:

In the Hartford Courant, my colleague Richard Grossman discusses the recently enacted financial regulation bill. Overall, he thinks it strikes a good balance:

Reimposing Depression-era constraints on banking would be the equivalent of setting a 25 mph speed limit on I-95. The accident rate would surely fall, but cost to commuters would be enormous.

Our best hope of avoiding a recurrence of the financial turbulence of the last few years is an improved regulatory structure, which the Dodd-Frank legislation will deliver if the new regulators adopt sensible rules, combined with effective and sustainable macroeconomic policies.