At the NY Times' Economix blog, Catherine Rampell reports survey results showing that economists are America's fifth most sleep deprived category of workers.
She seems puzzled by this:


Personally, I would love to know why economists are on this list. Economists in academia, at least,  seem to have flexible schedules that should let them get lots of sleep. Maybe a lot of them are grad students scrambling to publish, publish, publish. Or maybe there are a lot of folks like Larry Summers who prefer allocating more hours for work.

I've never met Larry Summers, but, based on what I've read, I don't think there are a lot of folks like him.

But the "scrambling to publish, publish, publish" certainly doesn't end in grad school - indeed, that's only the beginning of it.  I really like being an academic, but its not quite so cushy as people seem to think.  However, I'm not sure why that would be worse for economists than other academics - if anything, it should be better for us because our job market is better than in most disciplines.  But it does seem to be the case that economists are disproportionately represented among the faculty I see around the building late at night or on the weekends.  Perhaps economists face a lower opportunity cost of working (i.e., we have lousy social lives).

Or maybe we just love what we do!

However, there doesn't seem to be much variance among occupations.  The least sleep-deprived group is "forest, logging workers" who get 7 hours and 20 minutes of sleep -  that's only about 3 percent more than economists.  As an economist, I wonder if that's a statistically significant difference.
Labels: academe Links to this post 2 comments:

Abu Dhabi: the Hartford of the Gulf?

The Brookings Global MetroMonitor 2011 includes a ranking of the world's 200 largest metropolitan economies by per capita GDP:
Take that, Oslo!  We're #1!!

That comes to my attention via this report from the Courant, which notes that we don't do quite that well in other rankings.  For example, according to the BEA, among the 52 US "Metropolitan Statistical Areas" with more than 1 million people, the top five in terms of per capita real GDP (in 2005$) are:
(out of all 366 US MSA's, Hartford ranks 10th; to convert to 2011$, multiply by 1.1133).

Looking at the Brookings report, its not clear exactly how to account for the discrepancy - they cite Moody's Analytics as their data source for the US, though Moody's estimates are based on BEA data.  One of the report's footnotes says:


Moody's Analytics estimates GDP by metropolitan area as the sum of the GDP of component counties.  The GDP by county, estimated or forecasted, is obtained through allocating U.S. Bureau of Economic Analysis' state GDP to component counties based on the counties' share of employment in the state employment.

Hmm... that sounds like that might have the effect of smoothing income disparities within states, which would make Hartford appear even better off than it is because of the very high per capita GDP of the Bridgeport-Stamford-Norwalk MSA ($82,449) which in the same state (that number also explains why "Bridgeport" appears in Brookings' list - it shares an MSA with some very high income areas).

In any case, though the streets aren't paved in gold (or maybe we just put asphalt over the gold to avoid seeming ostentatious...), the Hartford area comes out pretty well no matter how you slice the economic statistics.  And there's good pizza, we get the Boston AND New York sports channels on TV, and you're never far from Dunkin' Donuts...
Links to this post No comments:

At Vox, Nicholas Bloom and Scott Baker argue "falling policy uncertainty is igniting the US recovery."

Since the idea that the economy weighted down by "uncertainty" induced by the Obama administration seems to have become a right-wing talking point, I'm instinctively skeptical.  However, the underlying premise that uncertainty could reduce investment and consumption is sensible (even if I don't think it explains much about the current slump).  So, perhaps its a worthwhile academic endeavor to try to quantify it and make an empirical study of its impact.

According to Bloom and Baker, their index of "policy uncertainty" has three components:
The difficulty with this arises from the possibility that an economic downturn causes the measures of policy uncertainty to rise, rather than vice-versa.

Certainly a downturn means more news about the economy, and it also leads policymakers to try to respond.  The process of negotiating a policy response through the political system is naturally uncertain, and leads to newspaper articles which discuss the various, uncertain, policy outcomes.  In the Obama era, for the sake of "fairness," in their stories about administration proposals, the media will quote critics, many of whom like to argue that the administration is destroying the economy by creating more "policy uncertainty."  The frequent repetition of this argument causes the measure of policy uncertainty to rise, regardless of whether it has merit.

One set of policy responses to a slump involve temporary tax cuts.  This leads to expiring tax code provisions, which increase the measure of policy uncertainty.  (Though in the US case, the main uncertainty was arguably created in 2001 and 2003 when Congressional Republicans passed tax cuts that were scheduled to expire in 2010).  Furthermore, if there is uncertainty about the state of the economy - which there often is during slumps - there will also be uncertainty among forecasters about future policies.

Overall, I would expect more "policy uncertainty" as Baker and Bloom measure it, during economic downturns - but I think it is primarily a consequence of a bad economy, rather than the cause.
Labels: macroeconomics, politics Links to this post 3 comments:

Bartlett: Not the Time for "Reaganomics"


Judging from the [Republican] candidates’ tax proposals, they seem to believe that the most Reagan-like candidate is the one with the biggest tax cut. But as the person who drafted the 1981 Reagan tax cut, I think Republicans misunderstand the premises upon which Reagan’s economic policies were based and why those policies can’t — and shouldn’t — be replicated today.

Although I am skeptical of "supply-side economics" in general, and I don't think that it should be considered a success in the 1980's (see this post, for example) I think Bartlett makes a reasonable case that it made more sense (or at least was less non-sensical) in 1980 than today:


When comparing Reagan’s policies with Republican proposals today, several things stand out. Inflation is low now. We are not looking at “bracket creep” or sharply rising taxes, as we were in the late 1970s. The top income tax rate is 35 percent, half the rate Reagan inherited. And federal revenue is at a 60-year low of about 15 percent of GDP, compared with a post-World War II average of about 18.5 percent.

These differences are essential to understanding why Reagan’s policies worked when they did — and why they are not appropriate today.

All of the evidence tells us that the economy’s fundamental problem today is not on the supply side but the demand side.

The BLS' employment report for January was a relatively good one: the economy added 243,000 jobs in January, and the unemployment rate fell to 8.3%. 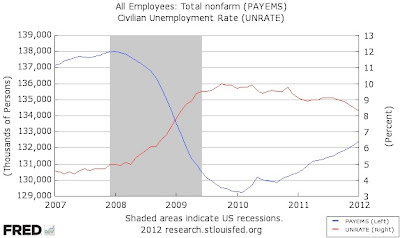 The headline jobs number comes from a survey of businesses (the "establishment survey") and the employment rate is calculated from a survey of households.  Both series had some revisions.  The establishment survey was updated based on information from unemployment insurance records, and these revisions resulted in higher estimates of employment for 2011 - the new estimate for the jobs number for Dec. 2011 was 266,000 above the old one (and the addition for January is on top of that).  The household survey data was updated based on census data, which led to an upward revision of the estimates of the size of the population and labor force.  The BLS explains:


The adjustment increased the estimated size of the civilian noninstitutional population in December by 1,510,000, the civilian labor force by 258,000, employment by 216,000, unemployment by 42,000, and persons not in the labor force by 1,252,000. Although the total unemployment rate was unaffected, the labor force participation rate and the employment-population ratio were each reduced by 0.3 percentage point. This was because the population increase was primarily among persons 55 and older and, to a lesser degree, persons 16 to 24 years of age. Both these age groups have lower levels of labor force participation than the general population.

Although the reasons for it have more to do with demographics than with discouraged workers, it is still disturbing to see that the revision pushed the labor force participation rate down to 63.7%, its lowest since 1983.

The revisions also mean that, despite strong employment gains in the month, the employment-population ratio remains at a depressed level of 58.5. 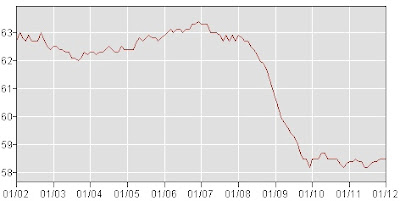 (Without the population data changes, the employment-population ratio rose by 0.3 and labor force participation was flat in January.)

Although the establishment survey jobs number gets more attention because it has a larger sample than the household survey, the household survey was stronger: the number of people reporting that they were employed increased by 847,000.  After removing the effect of the revision to the population data, the increase was 631,000.

January is a month with a big seasonal adjustment, which attempts to remove the effect of the decline in employment that normally occurs during this time of year (e.g., many holiday retail jobs end).  On a non-seasonally adjusted basis, the unemployment rate in January was 8.8%, and payroll employment fell by almost 2.7 million.  Floyd Norris has a skeptical note on the seasonal adjustment.

Overall, this report was good, but not nearly good enough.  While it is nice to see employment growth at a pace strong enough to actually improve things a bit (i.e., faster than the 125,000-ish jobs per month needed just to keep the unemployment rate constant as the population grows), the employment-population ratio illustrates that the economy is far from healthy.  12.7 million people remain unemployed, of whom 5.5 million have been unemployed more than 27 weeks, and "U-6", the BLS' broader measure of unemployment which incorporates discouraged workers and part time workers who want to work full time, is at 15.1%.