I'm hoping I'll have a chance to read Robert Gordon's new book soon, though one of the ironies of being a college professor is that the job doesn't seem to leave much time to read.  Fortunately, Gordon presents a condensed version of the argument in a recent Bloomberg View column, where he explains that he doesn't expect a return to the rapid productivity growth of the mid-20th century.  He writes:

The "third industrial revolution" - computers and the internet - is less significant, in his view:


Although revolutionary, the Internet's effects were limited when compared with the second industrial revolution, which changed everything. The former had little effect on purchases of food, clothing, cars, furniture, fuel and appliances. A pedicure is a pedicure whether the customer is reading a magazine or surfing the web on a smartphone. Computers aren't everywhere: We don’t eat, wear or drive them to work. We don't let them cut our hair. We live in dwellings that have appliances much like those of the 1950s and we drive in motor vehicles that perform the same functions as in the 1950s, albeit with more convenience and safety.

Our main measure of technological progress is total factor productivity (tfp) growth, which is sometimes called the "Solow residual" because it is calculated as a leftover, by subtracting from output growth the portions that can be explained by changes in capital and labor.  That is, it is the growth that would occur even if there was no change in the factors of production.

Turning points in tfp growth can be hard to identify because the data are somewhat volatile from year-to-year and have a cyclical component.  With hindsight, economists identified a productivity slowdown around 1973 and a resurgence - with information technology playing a leading role - in the mid-1990s.  However, tfp growth has generally been weak since 2005, raising the question of whether the IT-led productivity boom is over. 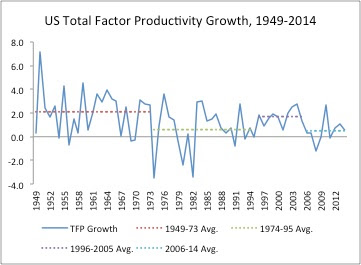 This San Francisco Fed Letter from last year discusses some of the reasons for the productivity slowdown.  Gordon's book was the subject of an Eduardo Porter column and a Paul Krugman review.