A Theory of Production

Economists often use the word "technology" to mean the relationship between output and factors of production such as capital and labor.  The Cobb-Douglas production function, which is a ubiquitous description of technology has its origin in a 1928 AER article, "A Theory of Production," by Charles Cobb and Paul Douglas.

Using C to denote capital, L for labor and P for production, the production function makes its first appearance: 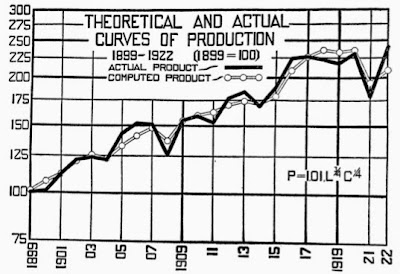 To a contemporary macroeconomist reader, the striking thing about the article is the extent to which it anticipates how we analyze business cycles today.  Cobb and Douglas, separate out cyclical and trend components (using 3 year moving averages) and show that the deviations of actual production and the production implied by changes in capital and labor are procyclical. 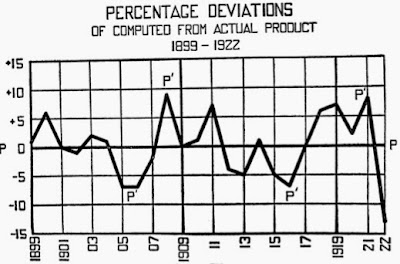 The article includes a chronology of business cycles which aligns with the NBER chronology; the NBER recessions during this period are
Cobb and Douglas' estimates are annual, but several of these do line up with points where P' (implied production) exceeds actual production, P.

Today these deviations of actual output from the amount implied by changes in factors of production are known as "Solow residuals" after work by Robert Solow in the 1950s and interpreted as measures of technological progress (i.e., our ability to wring more output out of given amounts of capital and labor).  Although Solow was mainly concerned with long-run growth trends, in the 1980's, Real Business Cycle theorists interpreted short-run fluctuations as "technology shocks".  In Real Business Cycle models these shocks drive economic fluctuations, and the same pattern identified by Cobb and Douglas - using postwar data and newer detrending techniques - was cited in support of this theory.  One weakness of this argument is that short run movements in the Solow residual are at least partly due to utilization - "factor hoarding" - rather than changes in technology.  This, too, was anticipated by Cobb and Douglas:


The index does not of course measure the short-time fluctuations in the amount of capital used.  Thus, no allowance is made for the capital which is allowed to be idle during periods of business depression nor for the greater than normal intensity of use int he form of second shifts etc., which characterizes the periods of prospertity.

Overall, this article would fit very well into a syllabus for a current course on business cycle theory.  Hmm...

A key point about "bailouts" - we say that a borrower got rescued, but the real beneficiary is usually the original creditors.  In the case of Greece, Ashoka Mody reminds us, Europe and the IMF got German and French banks off the hook:


Greece's onerous obligations to the IMF, the European Central Bank and European governments can be traced back to April 2010, when they made a fateful mistake. Instead of allowing Greece to default on its insurmountable debts to private creditors, they chose to lend it the money to pay in full.

At the time, many called for immediately restructuring privately held debt, thus imposing losses on the banks and investors who had lent money to Greece. Among them were several members of the IMF’s board and Karl Otto Pohl, a former president of the Bundesbank and a key architect of the euro. The IMF and European authorities responded that restructuring would cause global financial mayhem. As Pohl candidly noted, that was merely a cover for bailing out German and French banks, which had been among the largest enablers of Greek profligacy.

Ultimately, the authorities' approach merely replaced one problem with another: IMF and official European loans were used to repay private creditors. Thus, despite a belated restructuring in 2012, Greece's obligations remain unbearable -- only now they are owed almost entirely to official creditors.

This complicates the politics: the citizenry of Europe feels that Greece has already gotten a rescue at their expense, and now any restructuring is a hit to government finances (including to those of the US, as the largest shareholder of the IMF).  But since the debt has been transferred from the private to the official sector, it is tempting to believe that a Greek default - and an exit from the euro - are less likely to spark a financial crisis (though I wouldn't be so sure about this; people thought markets were "prepared" for Lehman's bankruptcy after all...).

The Greek government's handling of the situation has been less than smooth - I'm not sure what to make of the complaints about their negotiating style, but raising old war reparations claims and playing footsie with Putin do not seem like constructive steps.  Still, the fundamental position articulated by Greek finance minister Varoufakis in this Project Syndicate piece seems very reasonable (much more so than that of the EU finance ministers sniping at him).


[E]xiting the euro would be extremely costly and disruptive in Greece, and would pose huge political and financial risks for the rest of Europe. It’s therefore something to be avoided if there’s a halfway decent alternative. And there is, or should be....


The shape of a deal is therefore clear: basically, a standstill on further austerity, with Greece agreeing to make significant but not ever-growing payments to its creditors. Such a deal would set the stage for economic recovery, perhaps slow at the start, but finally offering some hope.

But right now that deal doesn’t seem to be coming together...

And as Antonio Fatas points out:


What the European partners want is much less clear. They would love to get paid back on all the current Greek government debt that they hold but that's unlikely to happen. Some would love to see Greece outside of the Euro area so that they do not have to deal with this again. There is a sense that whatever agreement is found now will not be the last one. The lack of trust has reached levels that has made it clear to some that Grexit is the best long-term outcome. But they are afraid of the consequences, both in the short run and in the long run in terms of credibility of the membership that would be left after Greece was gone.

This will be a test of the wisdom and statesmanship of Europe's leaders; Roger Cohen reminds us why - despite how lousy it looks at the moment - the European project is worth saving.  Things look set down to go down to the wire: the Greek government is scrounging all the euros out of its couch cushions but at some point it will miss a payment, which will force some difficult decisions.  Here's hoping Angela Merkel, Mario Draghi et al. rise to the occasion.

Update (5/5): The FT's Gideon Rachman makes a case for Grexit.
Labels: europe Links to this post No comments:

One of the claims about the Trans-Pacific Partnership (TPP) agreement is that it will benefit developing countries.  At Vox, Dylan Matthews spoke with Kimberly Ann Elliot of the Center for Global Development about how it will affect Vietnam, which has the lowest income among the countries negotiating the treaty.

Their discussion highlights a number of broader issues which arise with these regional (or "preferential") trade agreements:
Overall, this is a further reminder that assessing the economics of these agreements is much more complex than simply applying our findings about the gains from trade.
Labels: trade Links to this post No comments: