The bad weather last month on the east coast may throw off the unemployment numbers for Feburary, Floyd Norris explains:

For February, that was the week of the 7th to the 13th. There were blizzards on the East Coast the previous weekend, and again during the week.

That means that a lot of people who had jobs may report they did not work during the week, and companies may say they had fewer people on the payroll than they would have cited a week earlier or later. If so, we may get a truly horrid job number.

The Bureau of Labor Statistics employment situation summary for February is due out March 5.

One likely element of the second (or is it third?) stimulus jobs bill being kicked around in Washington is a tax credit for new hiring. Brad DeLong is circulating an economists' letter supporting the idea which says:

A well-designed temporary and incremental hiring tax credit is a cost-effective way to create jobs, and could work well in the current environment. At a time when GDP is beginning to rise and demand is starting to return, private firms are likely to respond to such a tax incentive by hiring sooner and more aggressively than they otherwise would have done. Such a credit could thus help put Americans back to work more quickly than otherwise. And by targeting firms that are growing, such a tax credit supports the businesses most likely to lead the recovery of employment.

In the Washington Post, Alan Blinder explains how to do it. Howard Gleckman, who is skeptical of the idea in general, says that the administration's version is much better than the proposal by Senators Hatch and Schumer.
Labels: fiscal policy, macroeconomics, politics, taxes Links to this post 1 comment:

One of the lessons of the global recession may be that central banks should target a higher level of inflation in normal times, says the IMF's Olivier Blanchard:

As a matter of logic, higher average inflation and thus higher average nominal interest rates before the crisis would have given more room for monetary policy to be eased during the crisis and would have resulted in less deterioration of fiscal positions. What we need to think about now if whether this could justify setting a higher inflation target in the future.

Paul Krugman approves: "I’m not that surprised that Olivier should think that; I am, however, somewhat surprised that the IMF is letting him say that under its auspices. In any case, I very much agree." Free Exchange explores the idea further.

As I discussed here, one of the difficulties in raising inflation targets would be maintaining monetary policy credibility in the face of doubts that such a shift would simply be a disguised means of using inflation to diminish the real value of debt.

Notes On A Greece Fire

The financial crisis is putting the euro - and the EU - to the test. Greece is having trouble with its burgeoning debt. From a useful backgrounder in The Economist, here is a plot of Greece's budget deficit: 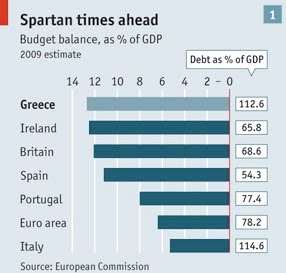 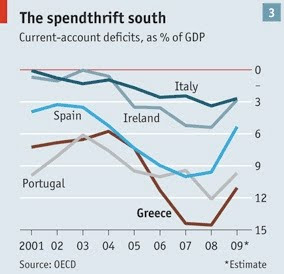 As the charts show, several other european countries appear to have similar problems, so if Greece goes, one wonders who the thundering herd of global finance would turn on next...

In the Journal, Simon Johnson and Peter Boone write:

Germany and France are cooking up a belated support package for Greece, but they have made it abundantly clear that Greece must slash public sector wages and other spending; the Greek trade unions get this and are in the streets. If Greece (and the other troubled countries) still had their own currencies, it would all be a lot easier. Just as in the U.K. since 2008, their exchange rates would depreciate sharply. This would lower the cost of labor, making them competitive again (remember Asia after 1997-'98) while also inflating asset prices and helping to refloat borrowers who are underwater on their mortgages and other debts. It would undoubtedly hurt the Germans and the French, who would suffer from less competitiveness—but when you are in deep trouble, who cares?

Since these struggling countries share the euro, run by the European Central Bank in Frankfurt, their currencies cannot fall in this fashion. So they are left with the need to massively curtail demand, lower wages and reduce the public sector workforce. The last time we saw this kind of precipitate fiscal austerity—when nations were tied to the gold standard—it contributed directly to the onset of the Great Depression in the 1930s.

The option of calling in the IMF offends European pride, but Jeff Frankel argues it is Europe's the best option to let the fund play the bad guy:

Things are not yet bad enough to require a Greek default. Quite likely, by now, they are bad enough to require outside intervention. But shouldn’t Greece have to draw on the IMF first, rather than drawing on Germany and France? The IMF could impose conditionality, thereby helping the current government with the Sisyphean task of making the necessary cuts stick. No doubt the government in Athens will promise Frankfurt or Brussels, as conditions for a loan, that it will clean up the Augean stables of its pension system, tax evasion, and the rest of its finances. But there is no use in pretending that such promises could be enforced in the future. Enforcement is not credible, given the politics and given what has come before. But conditionality is what the Fund does for a living. For all the criticism it sustains, the IMF is a better mechanism for tying Odysseus to the masthead than is any other institution.

Europeans worry that if Greece were put into default, troubles in Portugal and Spain would appear as quickly as heads on a hydra. Perhaps it is glib for an American, on the other side of the Atlantic, to discount the financial strains that Greece is placing on Europe — including Mediterranean contagion, loss of prestige of European institutions, and depreciation of the euro. But in fact it is the northern Europeans who should be most eager for the IMF to come in. They should be the most worried about what they are going to say to Portugal, Spain, Italy and Ireland — not to mention the Eastern Europeans, if instead they have just bailed out Greece.

In the FT, Thomas Palley says "Euroland is being crucified upon its cross of gold," but, of course the Germans prefer it that way. But Germany and its trade surplus are part of the problem, according to Martin Wolf.

The behavior of pair of UK supermarket chains grabbed a headline on the Guardian's website today:

Yes, that's, ummm... what businesses do.

Which reminds me, I need to go to the store, exploit supply today.
Links to this post 2 comments:

G-7 Takes Off to the Great White North

Finance ministers from seven of the world’s biggest economies concluded a meeting in the Canadian Arctic on Saturday with pledges to maintain their fiscal stimulus programs, despite rising worries among investors about the mounting debts of some European governments.

“We are all absolutely committed to maintaining the support for our economies until we make sure that we have recovery established,” Alistair Darling, Britain’s chancellor of the Exchequer, said in Iqaluit, Nunavut, where finance ministers and central bankers from the Group of 7 nations were meeting.

Iqualit, Nunavut?? I'm sure its a lovely place, but... 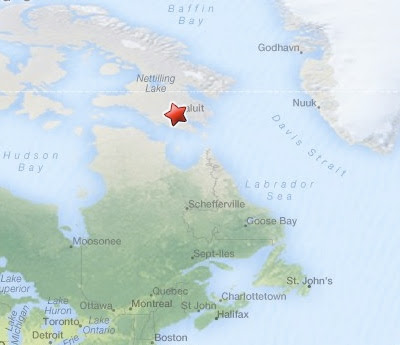 Given the troubles of the world economy, and the backlash generated by the various financial rescues governments have undertaken, I suppose that "finance ministers and central bankers" are mostly an unpopular bunch these days (certainly Geithner and Bernanke are not loved in the US right now), but dispatching them to the arctic in February seems a bit harsh.

The real motivation for the location? Apparently Canada is marking its territory:

Finance Minister Jim Flaherty acknowledged in an interview with The Associated Press that apart from wanting to showcase the charms of Nunavut (Inuit for “Our Land”), Canada is sending a diplomatic message about a territory that may contain one-fifth of the world’s petroleum reserves.

“It’s one of our government’s priorities, the assertion of our sovereignty in the Arctic,” Flaherty said.

Prime Minister Stephen Harper has made the Arctic a priority, pledging to increase Canada’s military presence in the Northwest Passage in case enough ice melts to make it a regular Atlantic-Pacific shipping lane. Canada says it owns the passage. The U.S. and others say it’s international territory.

Flaherty has said that the robust Canadian banking system does not need the fixes proposed by other countries.

"Canadians did not have to put taxpayers' money into our financial institutions. We did not have to bail them out," Flaherty said Jan. 27. "It is a rather different situation in other jurisdictions, like the U.S."

and a "summit-ending community feast with raw seal."

Someone will have to ask Tim Geithner if that was harder to swallow than the AIG bailout...

in the January employment report from the BLS, which came out today. 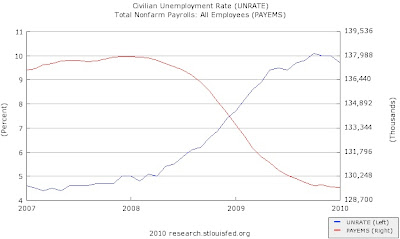 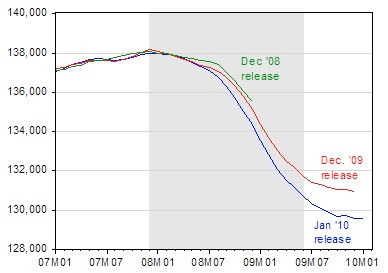 (Seasonally adjusted nonfarm payroll employment (thousands))
As for what this says about policy - the economy is much better off than it would be under a counter-factual of no stimulus recovery act. David Leonhardt writes:

[A] big part of it is the stimulus bill passed last year. All the well-known private economic research firms estimate that it’s had a huge impact. IHS Global Insight, for instance, says the economy has about 1.7 million more jobs today than it would have had without the stimulus.

But things could have been better, if the stimulus had been bigger - as Free Exchange reminds us, a year ago, the new administration was considering up to $1.2 billion, and that was based on forecasts that proved too optimistic.

N.B.: The reason for the disparity between the movements in the unemployment rate and in payroll employment is that they are generated from different sources; the former from a survey of households and the later from a survey of businesses.
Labels: fiscal policy, macroeconomics Links to this post No comments: