The eighth anniversary of the bankruptcy of the Lehman Brothers investment bank is coming up later this month.  It marked a point where the financial crisis, which had been simmering since summer 2007, seemed to go from bad to catastrophic.

One indicator of financial stress that we were all watching closely at the time was the "TED Spread" - the difference between the 3-month LIBOR (a rate on interbank loans) and the yield on 3-month US Treasuries - essentially a measure of the risk premium paid by financial institutions, which is normally quite low. 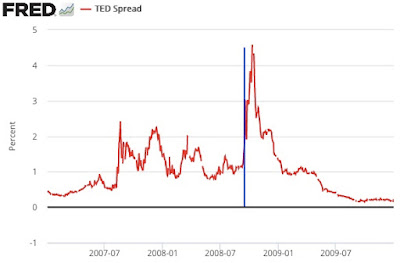 The Fed creatively expanded its "Lender of Last Resort" toolkit during the crisis, creating a number of new lending programs.  In March, it helped arrange the takeover of Bear Stearns by JP Morgan Chase.

Monday-morning quarterbacking of the government's actions (both the Fed's the Treasury's) began immediately and has never really stopped (academic macroeconomists consider it part of our jobs, after all).  One of the biggest questions has been why didn't Lehman Brothers get the same treatment as Bear Stearns?

The Fed did try to arrange a takeover by a healthier firm - a potential deal with Barclays was reportedly scuppered by British regulators - but no deal was finalized in time.  At the time, "moral hazard" concerns were prominent, and people felt the US government wanted to show that it was willing to let a financial institution fail.  Lehman's troubles were well-known, so it was hoped that the financial disruption would be modest since everyone had time to prepare for its demise.  More recently, officials have claimed that the Fed lacked the legal authority to rescue Lehman because it was truly insolvent - the intention of lender of last resort is to lend to illiquid banks, not insolvent ones (the Fed's loans are supposed to be backed by good collateral).

Laurence Ball of Johns Hopkins has dug into the records and is questioning the argument that the Fed did all it could (and should) have.  In a summary at VoxEU, he writes:


I conclude that officials’ explanation for the non-rescue of Lehman is incorrect, in two senses.
First, a perceived lack of legal authority was not the reason for the Fed’s inaction; and
Second, the Fed did in fact have the authority to rescue Lehman.
I base these broad conclusions on several findings, given below.
Further, from a de novo examination of Lehman’s finances, it is clear that the firm had ample collateral for a loan to meet its liquidity needs. In particular, I estimate that Lehman could have survived with $88 billion of overnight lending from the Fed’s Primary Dealer Credit Facility (PDCF), and the firm had at least $131 billion of assets that were acceptable as PDCF collateral.

Ball's argument was also discussed in a column by James Stewart in the New York Times.

In a Bloomberg View column, Barry Ritholtz disagrees with Ball's argument that Lehman was solvent, but, nonetheless, he thinks it could have rescued Lehman:


As subsequent events have shown, most especially with the Fed-led bailout of insurance giant American International Group, if there was a will, there most certainly was a way. Given all of the various bailouts of dubious legality, the Fed, Treasury and Congress most certainly could have devised a rescue plan for the 158-year old bank.

Even though he thinks Lehman could have been rescued, on the question of whether it should have, Ritholtz disagrees with Ball and believes that the Fed was correct to let it go:


No, Lehman Brothers did not “precipitate” the financial crisis. The better metaphor is that Lehman was the first trailer in the park to be destroyed by the tornado. Whether it lived or died was not going to stop the financial forces that had been decades in the making and unleashed when the credit bubble popped.

I agree with Ann Rutledge, a principal with New York-based R&R Consulting, and co-author of two books on structured finance. She noted “It wasn’t a mistake to let Lehman fail, it was a mistake to let it live so long.”

I haven't yet tackled Ball's monograph - perhaps that would be a good project for my Money and Banking students in block 5...
Labels: finance, monetary policy Links to this post No comments: