Vox has published Paul Krugman's speech at a conference commemorating the 75th anniversary of The General Theory.  The speech brings together a number of themes Krugman has addressed at his blog.  Among other things, Krugman says:


The brand of economics I use in my daily work – the brand that I still consider by far the most reasonable approach out there – was largely established by Paul Samuelson back in 1948, when he published the first edition of his classic textbook. It’s an approach that combines the grand tradition of microeconomics, with its emphasis on how the invisible hand leads to generally desirable outcomes, with Keynesian macroeconomics, which emphasises the way the economy can develop what Keynes called “magneto trouble”, requiring policy intervention. In the Samuelsonian synthesis, one must count on the government to ensure more or less full employment; only once that can be taken as given do the usual virtues of free markets come to the fore.

It’s a deeply reasonable approach – but it’s also intellectually unstable. For it requires some strategic inconsistency in how you think about the economy. When you’re doing micro, you assume rational individuals and rapidly clearing markets; when you’re doing macro, frictions and ad hoc behavioural assumptions are essential.

So what? Inconsistency in the pursuit of useful guidance is no vice. The map is not the territory, and it’s OK to use different kinds of maps depending on what you’re trying to accomplish. If you’re driving, a road map suffices. If you’re going hiking, you really need a topographic survey.

But economists were bound to push at the dividing line between micro and macro – which in practice has meant trying to make macro more like micro, basing more and more of it on optimisation and market-clearing. And if the attempts to provide “microfoundations” fell short? Well, given human propensities, plus the law of diminishing disciples, it was probably inevitable that a substantial part of the economics profession would simply assume away the realities of the business cycle, because they didn’t fit the models.

The result was what I’ve called the Dark Age of macroeconomics, in which large numbers of economists literally knew nothing of the hard-won insights of the 30s and 40s – and, of course, went into spasms of rage when their ignorance was pointed out.

I share Krugman's view that the "textbook" Keynesian apparatus remains a useful apparatus for thinking about the economy.  However, I think his portrayal of the turn macroeconomics has taken over the past forty or so years is a bit unfair.  As Krugman notes, contemporary macroeconomic models are grounded in microeconomic optimization.  Although a foolish desire for consistency can be the hobgoblin of our little economist minds, there is more to the story - the shift in methodology was also motivated by real deficiencies in the Keynesian framework identified by Friedman and Lucas, as well as the "stagflation" of the 1970's, which appeared to contradict Keynesian theory.
Labels: Keynes, macroeconomics, methodology Links to this post No comments:

I've been thinking I should say something about the contradiction between Washington's new obsession with budget cutting and the still-struggling economy, but this cartoon from Tom Toles nails it better than anything I could have said: 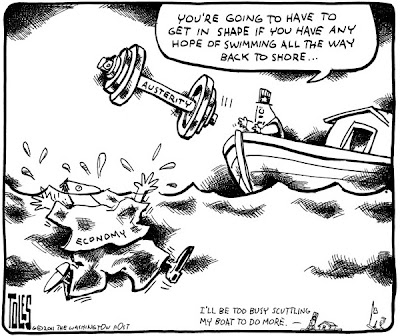 May Employment: Where are the Flowers

The May employment situation report from the BLS confirms the impression from other bits of data (see Gavyn Davies and David Leonhardt from last week) that the already sluggish recovery is wobbling.  Payroll employment (from the BLS survey of firms) rose by 54,000, which is quite a bit less than the 130,000 or so needed to keep unemployment steady as the labor force grows and productivity increases.  The unemployment rate (from the survey of households), ticked up to 9.1% (from 9% in April). 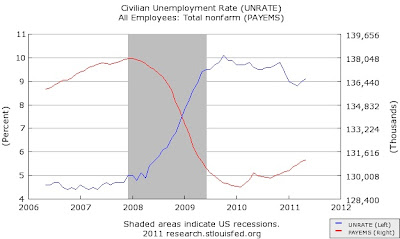 Mark Thoma has collected links to commentary on the report from around the econo-blogosphere.
Labels: macroeconomics Links to this post No comments: