A Goolsbee is Haunting Europe

In a WSJ op-ed, further elaborated in an interview with Ezra Klein, Austan Goolsbee lays out some of the fundamental problems of the Euro, which go deeper than the immediate financial crisis.  In particular, the common currency closes off the avenue of exchange rate adjustment. That is, without the Euro, the DM would be rising and the Lira and Peseta falling, improving Italian and Spanish current account balances.  He concludes:


[E]ven if Europe addresses the banking-capitalization crisis of the moment, and even if it struggles its way through the near-term fiscal crises of Greece and Italy, then what? With little prospect for growth in its South, Europe remains on the romantic road to nowhere—a road that merely runs in a circle. Without growth there will always be another fiscal crisis ahead for yet another country unable to balance its budget but prevented from devaluing and exporting its way forward.

On this path, Europeans will forever need to fight off financial and fiscal panics while trying to build their castle on a hill.

What really matters is the real exchange rate - i.e., the price of one country's goods in terms of another's.  The real exchange rate between two countries is the nominal exchange rate times the ratio of the countries' price levels.  Even if both countries have the same currency, the real exchange rate changes if they have different inflation rates.  This means that Greece, Italy and Spain can have a real depreciation vis a vis Germany by having lower inflation, which would, over time, make their goods relatively cheaper.  Of course, to get very far with this, if German inflation is low, then the peripheral countries' price levels actually need to fall.  This is sometimes called "internal devaluation", and because it entails deflation, is quite painful.  This what Goolsbee is talking about when he says: "In the short run, that would mean directly and significantly grinding down wages to make them competitive—a grisly option, prone to causing mass unrest."

I think this would be significantly less painful if it didn't involve price levels actually falling and, in principle, it doesn't have to.  For simplicity, say the Eurozone consists of a "core" and "periphery" of equal size.  If Eurozone inflation is 4%, it could be 7% in the core and 1% in the periphery, which means the periphery experiences real depreciation at a 6% rate.  However, the ECB is quite firm about sticking to its mandate - which reflects German preferences - for inflation at or below 2%.

In a way, this is analogous to the Akerlof-Dickens-Perry case that slightly positive inflation facilitates real wage adjustment because it allows some real wages to fall without forcing very difficult nominal wage cuts.
Labels: europe, exchange rates Links to this post No comments:


The tuna dispute was resolved in 1992 when the United States, Mexico, and eight other tuna-fishing nations signed an international agreement to regulate the conditions of tuna fishing.


At its last meeting on 11 November, the WTO Dispute Settlement Body (DSB) decided to extend the deadline for submitting an appeal on the latest Tuna-Dolphin (DS381) ruling issued in September (see Bridges Weekly, 21 September 2011).

In light of the Appellate Body’s substantial workload, the US and Mexico had jointly requested an extension of the normally sixty-day period, which otherwise would have expired on 15 November. In accordance with the agreed extension, an appeal will have to be submitted no later than 20 January.

Lesson: never use the word "resolved" when writing about trade disputes....

To be fair to Irwin, whose book I recommend (and assign to students), one could consider "Tuna-Dolphin" to be a series of disputes, one of which was resolved in 1992.
Labels: trade Links to this post No comments:

Is the ECB Determined to Go Down with the Ship?

With the risk premium on Italian government debt growing, the best hope for a resolution to the Euro crisis would seem to be for the European Central Bank to announce an unlimited intervention to cap the yield on sovereign bonds.  However, it steadfastly refuses to do so - presumably because it feels that such an action might risk a violation its prime directive of "inflation rates of below, but close to, 2% over the medium term."

In a recent Project Syndicate column, Brad DeLong argued that the ECB is failing to step up to the plate as the lender of last resort:


The ECB continues to believe that financial stability is not part of its core business. As its outgoing president, Jean-Claude Trichet, put it, the ECB has “only one needle on [its] compass, and that is inflation.” The ECB’s refusal to be a lender of last resort forced the creation of a surrogate institution, the European Financial Stability Facility. But everyone in the financial markets knows that the EFSF has insufficient firepower to undertake that task – and that it has an unworkable governance structure to boot.

Perhaps the most astonishing thing about the ECB’s monochromatic price-stability mission and utter disregard for financial stability – much less for the welfare of the workers and businesses that make up the economy – is its radical departure from the central-banking tradition. Modern central banking got its start in the collapse of the British canal boom of the early 1820’s. During the financial crisis and recession of 1825-1826, a central bank – the Bank of England – intervened in the interest of financial stability as the irrational exuberance of the boom turned into the remorseful pessimism of the bust.


Here’s where the political cover comes into play. Merkel and Sarkozy need to make the case that if the euro is to become a normal currency, Europe needs a normal central bank – one that does not merely target inflation like an automaton, but that also understands its responsibilities as a lender of last resort.

More on this from The Economist, Antonio Fatas, Gavyn Davies and Martin Wolf as well as a nice "news analysis" from the NY Times.

If Italy is fundamentally solvent and merely facing a self-fulfilling "liquidity" panic (as investors sell bonds, yields rise, making it more costly to service its debts, which lowers the chances it will avoid default leading to investors selling bonds...), then it may not require much more than an announcement of a willingness to intervene to quell the crisis.  By restoring confidence, the ECB could bring yields down without having to do much actual bond-buying (i.e., Super Mario* can be Chuck Norris).

The crisis potentially spells the end of the Euro - so the ECB is putting its mandate ahead of its own self-preservation.  That is, it appears willing to risk its very existence for the sake of what it sees as its duty.  As a matter of economic policy, it looks disastrously foolish, and yet, there's something oddly noble-seeming about it.


*Admittedly, referring to Italian policymakers named Mario as "Super Mario" is getting stale quickly (and I can't imagine how much they must despise it); and the press needs to decide whether it is ECB President Mario Draghi or new Prime Minister Mario Monti who is called "Super Mario" (or perhaps not... a quick search of "Super Mario" on the FT reveals a potentially confusing solution: "Super Mario Brothers").  The Guardian compares two of the "Super Marios" and this FT profile argues Draghi earned his "super."
Labels: europe, macroeconomics, monetary policy Links to this post 2 comments:

Not really good, either...  The BLS reports that the unemployment rate ticked down to 9.0% (from 9.1%) in October.  Payroll employment increased (weakly) by 80,000; the private sector added 104,000 jobs but the public sector subtracted 24,000.   The numbers from the survey of households (which is used to calculate the unemployment rate) were a bit stronger - the number of people employed rose by 277,000. 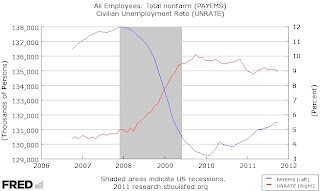 Also, the payroll employment growth (from the survey of establishments) figures were revised upwards for August and September, by 57,000 and 55,000, respectively.

In the Times last weekend, Christina Romer suggested a precedent for a switch in our monetary policy regime.  The Volcker Fed tightened money growth (thereby letting interest rates rise severely - the Fed funds rate was briefly above 19% at a couple of points in 1981) - the point was to bring the hammer down on inflation. As Romer notes, this very unpleasant policy was justified by a shift to a "monetarist" regime of targeting money growth.  As I've discussed before, I have mixed feelings about the lionization of Paul Volcker, but I think Romer has a good point that it may be time for another regime shift, this time to nominal GDP level targeting:


Mr. Bernanke needs to steal a page from the Volcker playbook. To forcefully tackle the unemployment problem, he needs to set a new policy framework — in this case, to begin targeting the path of nominal gross domestic product.
Nominal G.D.P. is just a technical term for the dollar value of everything we produce. It is total output (real G.D.P.) times the current prices we pay. Adopting this target would mean that the Fed is making a commitment to keep nominal G.D.P. on a sensible path.

See also Paul Krugman, who agrees and Binyamin Appelbaum, who reports that the Fed is unmoved. Free Exchange's Greg Ip makes a contrary case and his colleague Ryan Avent responds.
Labels: macroeconomics, monetary policy Links to this post No comments: