Being an academic economist can be humbling - while it involves learning lots of esoteric stuff, it also makes one much more aware of how much one doesn't know.  But I know this much is true: the total amount of goods and services produced in Ireland did not increase by 26.3% in 2015.

But that's what Ireland's Central Statistics Office has reported.  It's not entirely clear how they came to such a (literally) incredible figure for real GDP growth.   The expenditure approach to calculating GDP adds up purchases of new final goods and services in four categories - consumption (C), investment (I), government purchases (G) and net exports (NX).  I took the data from table 6 of their release and normalized each component to 100 in 2010 to illustrate how the change is driven by large jumps in I and NX. 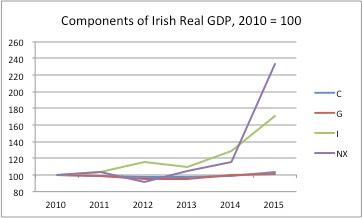 News reports have focused on activities of multinational corporations, particularly on "inversions" which involve transferring their legal headquarters to Ireland in order to take advantage of its low corporate tax rates.

That may be correct, but its not an entirely satisfying explanation.  GDP is supposed to measure the value of goods and services produced in a country.  The legal domicile of the corporations producing it is irrelevant.  Ownership of capital - both physical machinery, equipment and structures and also intangible forms (intellectual property, etc.) - also is irrelevant, so the fact that multinational corporations like to hold IP in Ireland for tax reasons shouldn't matter in principle.

Gross National Product (GNP) adds up the total value of goods and services produced with resources owned by a country's citizens.  Since many multinational corporations operate in Ireland, it has higher GDP than GNP because some of its GDP is produced using foreign-owned capital - the same data release showed a shocking increase of 18.7% in Ireland's GNP last year.

The information released by the CSO is not very detailed.  The FT Alphaville's Matthew Klein, Bloomberg Columnist Leonid Bershidsky, and Seamus Coffey at the Irish Economy blog have made useful attempts at sorting things out.

Clearly, the way the CSO is calculating GDP is failing to correspond to the concept.  Statistical agencies need to provide estimates calculated in a consistent fashion, so it wouldn't have been appropriate for them to suddenly decide to calculate it differently because they got a strange number.  But the methods for estimating GDP are not etched in stone.  If legal and accounting maneuvers of multinationals are distorting some of their source data, they need to find a way of correcting for it.  Standards for national accounts are coordinated internationally and it is not clear whether the problems in this report are due to something the CSO is doing or a more general methodological issue which happens to be most apparent because of Ireland's unique circumstances.

Statistical agencies update their methods and revise their estimates regularly - e.g., in 2013, the US BEA did a "comprehensive revision" that began the treatment of development of intellectual property as a component of investment (see this earlier blog post).  I hope the CSO will release more information to help everyone better understand what's gone wrong with their figures.  That will be a first step towards correcting the method used to estimate GDP and producing a revised set of figures - one which will not show a 26% increase in real GDP in 2015.