Fed District 1 Rolls Up Its Sleeves

If the FOMC won't do enough on unemployment, the Boston Fed says "we'll do it ourselves, the hard way - one job at a time":

I'm pretty annoyed at the Fed. On the other hand, holy crap look at every other large advanced economy.

The BEA's advance estimate puts real GDP growth at 2.2% for the first quarter.  That's down a bit from 3.0% in the last quarter of 2011, but overall its consistent with the picture over the last two years of an economy that is growing, but not quickly enough to make up the lost ground from the severe recession in 2008-09. 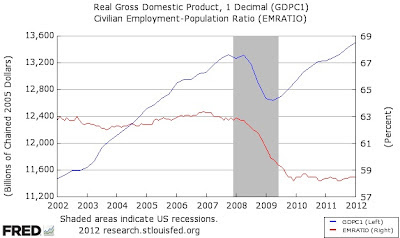 The blue line is real GDP and the red line is the employment-population ratio (part of the dip might be due to demographics).

Things looked better on the consumer side - durable goods purchases rose at a 15.3% rate.  But businesses are still holding back on investment - equipment and software investment rose at a weak 1.7% pace.  Investment in housing is finally growing a little bit, but from a very low base.  This chart shows three sub-components of investment as shares of GDP since 1970 - equipment and software (blue), residential housing (orange) and nonresidential structures (green). 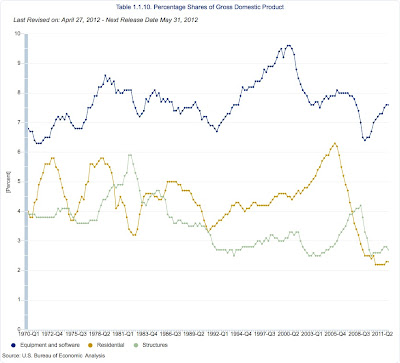 Government was a drag, again; absent the decline in government purchases, growth would have been 2.8%.  While austerity is pushing European economies back into recession, semi-austerity here is holding back the US recovery.  In this particular quarter, most of the dip in government purchases was due to defense, so it may partly reflect quirks of the timing of exactly when the Pentagon spends its money.

The inflation rate, measured by the GDP deflator, was 1.5%.  However the personal consumption expenditures (PCE) deflator rose at a 2.4% rate and core (excluding food and energy) PCE inflation was 2.1%.  Given the apparent emphasis by the Fed on keeping PCE inflation below 2%, that doesn't give them room to maneuver - i.e., it makes it even tougher for the "doves" on the FOMC, alas.

Update: More from Calculated Risk, Jim Hamilton, and me, in a story by Kevin Hall of McClatchy Newspapers:


“Given corporate profits, you might have hoped for more investment growth,” Craighead said. The economy continues to “hit the snooze button. … It’s acceptable growth in the normal economy, but given how many people are unemployed it is disappointing.”

Who Bails Out the IMF?


Over the weekend, the monetary fund became a lot more leveraged — that is, its debt increased relative to its equity. The potential future liability to American taxpayers went up, because the risk of large credit losses increased, and those losses would need to be covered by shareholders (and the American stake in the fund is 17.69 percent of quota, with 16.8 percent of the votes).

There is also an implicit guarantee — arguably without limit — from the United States to the monetary fund. The United States set up the world trading system after World War II, and has a huge amount to lose if it fails. It also has deep pockets, compared with almost all other countries.

Therefore, unlike those at a typical corporation, the shareholders in the International Monetary Fund do not have limited liability, so we should care a great deal about the downside risks. The Europeans are currently increasing those risks — by lending to the fund and planning to use fund loans as part of future bailouts.

It hadn't occurred to me to worry about that.  Darn those "implicit guarantees"...

The IMF's creditors, on the other hand, are governments.  If the IMF were to become insolvent, it would be a diplomatic issue, since governments would stand to lose money, but I'm not sure it would be such a problem for the world financial system.  How much - beyond the money the US has put into it - the US would have to lose if the IMF fails is not immediately obvious to me.  While a failure wouldn't spark an immediate financial crisis in the conventional way (though no doubt everyone would be pretty spooked!), how much worse off one thinks the world would be without the IMF depends on how much good you believe the IMF does.  And that is something people can (and do) debate.
Labels: finance, macroeconomics Links to this post No comments:


"Monetary policy is not a panacea and central bank firepower is not unlimited, especially not in a monetary union,” he said. “We can only win back confidence if we bring down excessive deficits and boost competitiveness. And it is precisely because these things are unpopular that makes it so tempting for politicians to rely instead on monetary accommodation."

As a factual matter, Weidmann is just plain wrong (and I think he knows it - perhaps this was just a poor word choice on his part).  In a fiat money system the central bank's firepower - its ability to create money - is unlimited.  There are good reasons why central banks choose to exercise restraint, but it is a policy choice.  In the case of Europe today, the ECB could create money to buy government bonds.  A mere expression of willingness to use its "firepower" this way could significantly bring ease the pressure on bond spreads.

The objections to this are twofold: (i) it creates "moral hazard" by allowing governments to escape the consequences of their own fiscal policies (though as Krugman and others have pointed out, the standard narrative about profligate peripheral governments is not really accurate) and (ii) money creation could lead to inflation.  Some of us think a little more inflation in Europe would actually be quite helpful, but others - particularly in Germany due to the memory of hyperinflation in the 1920s - are quite averse to it, and modern central bankers worry alot about maintaining the "credibility" of low inflation expectations.

In any case, the ECB has the firepower, its just choosing not to use it.
Labels: europe, monetary policy Links to this post 2 comments:

Transparency Versus Clarity at the Fed

In the Times, a nice story by Binyamin Appelbaum about how confusion and uncertainty about monetary policy persists, despite the Fed's moves towards greater transparency, such as publishing forecasts and holding press conferences (remember: before 1994, the Fed didn't even announce changes in the Fed Funds rate target).


Experts and investors have continued to disagree about the plain meaning of the Fed’s recent policy statements. Some say the increased volume of communication is creating cacophony rather than clarity. Political criticism of the Fed has continued unabated.

I'm not sure the uncertainty regarding the Fed's intentions should be considered a failure of communication.  This is an unusual time for monetary policy, with the financial crisis and "zero lower bound" forcing the Fed to experiment with different policy tools.  To the extent that the Fed's signals are unclear, I suspect that reflects genuine uncertainty within the Fed.

There is also significant degree of genuine disagreement among the members of the FOMC.  While Bernanke's tolerance for expressions of divergent views may enable "cacophony," in forming expectations about future policy it is quite useful to have a sense of the individual members' opinions since decisions will ultimately be made by a committee.

Just like monetary policy itself, the Fed's communication policy should be evaluated relative to a counterfactual (i.e., what would have happened without it).  While we may have a hard time predicting the course of monetary policy now, I think the outside world would be in a state of much deeper confusion if all of the unconventional monetary policy moves over the past several years had been conducted under the older tradition of secretiveness at the Fed.
Labels: macroeconomics, monetary policy Links to this post No comments:

The March employment report from the BLS was not a very strong one.  The unemployment rate ticked down to 8.2% (from 8.3% in Feb.) 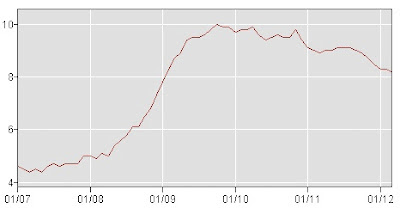 However, that was attributable to a decline in labor force participation, not job growth.  The unemployment rate is calculated from a survey of households, and to be counted as unemployed someone must say that they are looking for work, so if people stop looking (i.e., they leave the labor force) that reduces the unemployment rate.  In the household survey, the number of people reporting that they were employed actually decreased slightly (by 33,000), but the number of people in the labor force (i.e., working or looking for work) fell by 164,000. 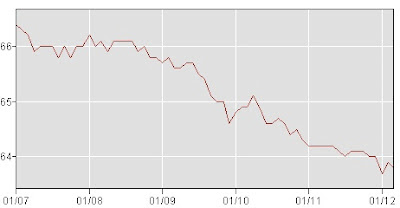 The headline jobs number - nonfarm payroll employment - comes from a survey of businesses (it is considered more reliable because of a larger sample).  That figure was a little better, but still unimpressive - a gain of 120,000 jobs, which is roughly consistent with a pace needed to keep up with population growth, but far short of enough to make a dent in unemployment.

This report was a bit weaker than the past several months.  Some have argued that the unusually warm weather in the winter may have provided a boost to hiring in those months, and if employers were bringing forward some of their hiring, it would also mean slightly less hiring than usual in the spring.  This would mean the BLS' seasonal adjustment is slightly off.  On a non-seasonally adjusted basis, nonfarm payrolls increased by 811,000 (but that's mostly due to the normal increase in this time of year so nothing to get excited about), and the unemployment rate rate fell from 8.7% to 8.4%.

Overall, this remains consistent with the view of an economy in a very slow recovery.  Unemployment is still extremely high; about 12.7 million people are unemployed and many more are "discouraged workers" who have left the labor force or underemployed ("part time for economic reasons").  The BLS' broader measure that includes these people, "U-6," stands at 14.5%, which is down quite a bit from its peak, but still very high.

While the stronger reports over the past several months may have created a sense that the economy was picking up steam on its own, the March report may be a useful reminder that it could still use a push from policymakers.  According Tim Duy's and Gavyn Davies' readings of the most recent Fed minutes, they appear inclined to hold off on further expansionary policy measures.  Hopefully they will take today's report as an indication that such complacency is unwarranted (and Paul Krugman's critique of the Fed in his column today is timely).
Labels: macroeconomics Links to this post No comments: