Today's Washington Post provides another example of our dysfunctional "Antidumping" rules in action.  This case is about antidumping tariffs imposed on furniture imports from China:


But do tariffs work? In the case of bedroom furniture, they’ve clearly helped slow China’s export machine. In 2004, before tariffs went into force, China exported $1.2 billion worth of beds and such to the United States. The figure last year was just $691 million.

Over the same period, however, imports of the same goods from Vietnam — where wages and other costs are even lower than in China — have surged, rising from $151 million to $931 million. The loss of jobs in America, meanwhile, only accelerated.

This may be a case where the differential tariff treatment between Chinese and Vietnamese furniture which resulted from the antidumping case induced "trade diversion" - i.e., an efficiency loss because the trade preferences result in imports coming from someplace other than the low cost producer.  However, in this example, it could also be the case that comparative advantage shifted to Vietnam as China's labor costs have risen.


The only Americans getting more work as a result of the tariffs are Washington lawyers, who have been hired by both U.S. and Chinese companies. Their work includes haggling each year over private “settlement” payments that Chinese manufacturers denounce as a “protection racket.”

Fearful of having their tariff rates jacked up, many Chinese furniture makers pay cash to their American competitors, who have the right to ask the Commerce Department to review the duties of individual companies. Those who cough up get dropped from the review list.

It is clear from the article that workers in the US industry have suffered from a disruptive wave of furniture imports.  While it may indeed be the case that the US no longer has a comparative advantage in furniture production, standard comparative static trade theory fails to account for the adjustment costs associated with reallocating resources.  That is, trade theory assumes full employment and that workers will be shifted to another sector, ignoring the fact that this process involves losing their jobs in one industry and, usually, a period of unemployment before finding a job in another.

Although it is also less than perfect, a more appropriate remedy in this case would be the application of "safeguard tariffs" which the President can impose (following the recommendation of the International Trade Commission) in cases where industries are disrupted by import surges.  Relative to antidumping tariffs, safeguards have the advantages of being (i) time limited, (ii) at the discretion of the president (who presumably can consider the interest of the nation as a whole, rather than just an affected industry or region), and (iii) not requiring any allegation of "unfair" trade practices on the part of the exporters (which are usually somewhat bogus).
Labels: trade Links to this post 3 comments:

When I saw this headline on the Washington Post's website

I thought the president was going over there to work out a debt restructuring, but that's not the kind of bonds they mean.

It would be kind of weird if a US president to be directly involved in a European sovereign debt crisis (though it has global repercussions so the US is not disinterested), but Europe sure seems in need of some kind of intervention.  It is easy to understand why politicians prefer to hope they can get through the next election before things blow up rather than confronting a debt crisis.  Unfortunately the two institutions best placed to push Europe's politicians into a restructuring of Greek (and maybe Irish) debt that everyone knows is necessary - the ECB and IMF - are not being helpful, according to Steven Pearlstein:


At the time of his arrest, Strauss-Kahn was headed to a meeting with German Chancellor Angela Merkel, reportedly to talk her out of a debt restructuring plan for Greece. The official IMF view, like that of the European Central Bank, is that allowing any euro-zone country to restructure its debt will trigger another global financial crisis as investors rush to indiscriminately dump all their European bonds, forcing European banks, which hold large piles of them, into insolvency. In this scary scenario, a debt default or restructuring in any euro-zone country would cause the collapse of the euro.

Pearlstein goes on to explain why this logic is flawed.  Indeed, Kash Mansouri argues that the ECB is, in effect, pushing Greece out of the Euro (though he seems to interpret this as an unintended consequence...).

Its not really President Obama's job to tell Europe how to sort out their debt problems - indeed, he's got his hands full with a Congress that seems to want to set off a much bigger crisis by not raising the debt ceiling - but hopefully he can give them a friendly nudge in the right direction while he's over there.  And the US should be using its influence over the IMF to get them to play a more constructive role.
Labels: europe Links to this post 2 comments:

The BLS reports this morning that the economy added 244,000 jobs in April, but the unemployment rate ticked up to 9% (from 8.8%).  In this case, the reason for the apparent contradiction is that the two numbers come from different surveys - the first is from a survey of firms (the "establishment survey"), and the unemployment rate from a survey of households.  The household survey reported a decrease of 190,000 in the number of people employed.  In general, the two track each other well, but may diverge in any given month; when that happens people tend to trust the establishment survey more because it has a larger sample.

Nonfarm Payrolls, Seasonally Adjusted
Overall, this report seems to be consistent with an economy digging out of a very deep hole at a very slow pace.  While the increase in 244,000 jobs more than what is needed just to keep pace with labor force growth (130,000-ish), 13.7 million people remain unemployed.  The economy is about 4.6 million jobs short of a "normal" (but still not great) unemployment rate of 6% - at this pace, we'd get there in about three and a half years.

The report also included slight upward revisions of the February and March employment numbers (41,000 and 5,000 respectively).

Average hourly earnings have increased by 1.9% over the past year.  That's more evidence that inflation is not a problem: wages should rise somewhat due to productivity growth, so that's not an inflationary number at all.

On a non-seasonally adjusted basis, the unemployment fell from 9.2% to 8.7% in April (i.e., this is a month with a large seasonal job increase, which the BLS tries to remove from all of the numbers discussed above, which are seasonally adjusted).
Labels: macroeconomics Links to this post 2 comments:


The fact is that we need fewer efficient-markets theorists and more people who work on microstructure, limits to arbitrage, and cognitive biases. We need fewer equilibrium business-cycle theorists and more old-fashioned Keynesians and monetarists. We need more monetary historians and historians of economic thought and fewer model-builders. We need more Eichengreens, Shillers, Akerlofs, Reinharts, and Rogoffs – not to mention a Kindleberger, Minsky, or Bagehot.

Yet that is not what economics departments are saying nowadays.

Perhaps I am missing what is really going on. Perhaps economics departments are reorienting themselves after the Great Recession in a way similar to how they reoriented themselves in a monetarist direction after the inflation of the 1970’s. But if I am missing some big change that is taking place, I would like somebody to show it to me.

As if it weren't bad enough that some assistant professors are writing blogs, a Michigan grad student named Noah Smith is blogging, too.  After a description of his first-semester macro class, he says:


This course would probably have given Brad DeLong the following reasons for complaint:

1. It contained very little economic history. Everything was math, mostly DSGE math.
2. It was heavily weighted toward theories driven by supply shocks; demand-based theories were given extremely short shrift.
3. The theories we learned had almost no frictions whatsoever (the two frictions we learned, labor search and menu costs, were not presented as part of a full model of the business cycle). Other than Q-theory, there was nothing whatsoever about finance* (Though we did have one midterm problem, based on the professor's own research, involving an asset price shock! That one really stuck with me.).

At the time I took the course, I didn't yet know enough to have any of these objections...


[M]odern graduate-level macroeconomics has managed to bury and forget what earlier generations knew, so that what was billed as intellectual progress ended up being, in crucial ways, intellectual regress.

Grad school is trying to produce "productive" scholars, good practitioners of what Thomas Kuhn would call "normal science", who generate publications in academic journals.  As such, much of it, especially the first year, is about learning techniques and terminology.  Most of what I remember from my first year is doing alot of algebra - and that's not a bad thing, being at least somewhat good at algebra turns out to be pretty important, as is knowing about things like Kuhn-Tucker conditions, Hamiltonians, and Bellman equations.

In that sense, I don't think economics PhD programs do such a bad job.  My first year graduate course was mostly growth theory and dynamic consumption theory, which were good vehicles for exposing us to the nuts and bolts of macroeconomic models.  What is missing, is a sense of perspective and context.  Contemporary academic models are grounded in "microfoundations" - the optimization problems of forward-looking agents - and, as such are very different from the models taught to undergraduates.  First-year graduate students learn quickly that macroeconomics is very different from what they expected (i.e., its "micro with time subscripts"), but they don't know why.  Time is precious in putting together a course, but I think a prologue which develops the motivation behind contemporary methods - principally the Lucas Critique and rational expectations revolution - would be time well spent (this article by Greg Mankiw is a good place to start).

DeLong and Krugman lament the lingering prominence of the "saltwater" Real Business Cycle (RBC) paradigm, and they have pointed out some startling statements by prominent true believers.  However, there is good reason for nonbelievers to learn these models, as the methods used by them are also at the core of many state-of-the-art New Keynesian models.

If a PhD program can get its students through some growth theory and consumption theory, which come together in the Ramsey-Cass-Koopmans model, and take the small step from there to RBC models in the first year, those students would be well-prepared to study models with frictions and market failures more relevant to current problems in the second year.

Previously, I have also argued for including history of economic thought in the graduate curriculum.  The trick would be to get people to take it seriously.  This would help recover some of the insight that Krugman (rightly) believes have been obscured.  Moreover, this might get students thinking more broadly, which would improve the likelihood that they might actually be in a position to re-think and change existing paradigms, rather than just being "productive" within them.
Labels: academe, pedagogy Links to this post No comments: 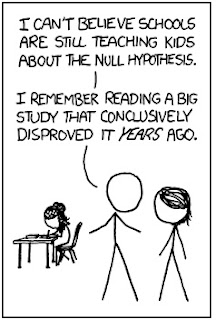