In the Washington Post last week, Larry Summers wrote about some new research finding evidence of "hysteresis."  This is a term borrowed from the natural sciences for when temporary occurrences have lasting effects - e.g., when you hold a magnet up to a piece of metal, the metal remains magnetized even after you remove the magnet.  In macroeconomics, hysteresis occurs when an economic downturn has a lasting effect on economic capacity (i.e., reduced "potential output"); that is, lack of demand creates its own lack of supply.

Hysteresis could occur through a number of channels. Consider an economy described by an aggregate production function Y* = AF(K,N*) where potential GDP (Y*) depends on productivity (A),  capital (K) and labor at its "natural" or "full-employment" level, N*.  A recession occurs when output falls below Y* and labor is below N* (i.e., there is unemployment in excess of the "natural rate").  Hysteresis implies that there is a lasting impact on Y* - this could occur through technology, capital or labor.

All three channels could be operative. In the past several years, productivity growth has been sluggish, though its not clear if this is linked with the recession (productivity trends are always somewhat mysterious).  The recovery of investment (the rate of flow into the stock of capital) from the recession has been less than spectacular, even taking out housing - the share of GDP devoted to nonresidential fixed investment is somewhat below its peak in previous expansions.

Here, I want to focus on labor, where the hysteresis effects are pretty evident, and raise an interesting policy dilemma.

Although the unemployment rate has fallen to what we might consider a reasonably healthy level of 5% (the normal turnover of a healthy labor market generates some unemployment so we never expect it to get to zero), the labor market still clearly bears the scars of the 2008-09 recession.

The duration of unemployment spells rose to unprecedented levels and has remained elevated (a useful comparison is to the 1981-82 recession - the unemployment rate peaked at 10.8% at the end of 1982, but the dynamics of duration were not nearly as severe). 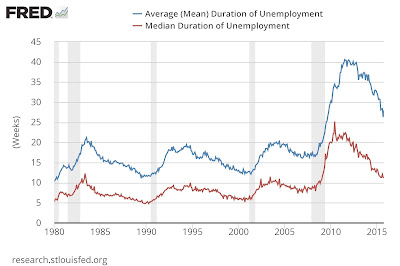 People with spells of long-term unemployment have a harder time finding jobs.  But looking at the unemployed leaves out those who left the labor force entirely.  The last several years have seen a significant drop in labor force participation rates, even among people aged 25-54 (focusing on this group is a rough way to control for the drop in overall participation due to an aging population, though as this Calculated Risk post notes, there is a composition effect even within the 'prime age' group). 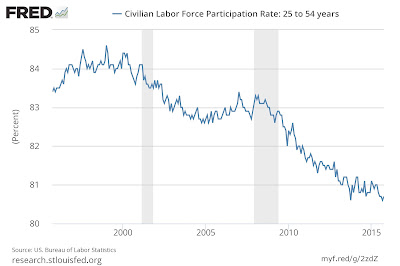 The labor market clearly is not as robust as the headline unemployment rate suggests.

What are the implications for monetary policy of having a high proportion of long-term unemployed, and possibly a substantial latent group of unemployed who have left the labor force?  One answer is suggested by this St Louis Fed blog post by Stephen Williamson:


[I]f we think of the long-term unemployed as being subject to the mismatch problem and highly likely to leave the labor force, then these unemployed workers are not contributing much to labor market slack. They are unlikely to be hired under any conditions.

That is, the unemployment (and presumably the depressed particpation rate, too) is "structural" in nature, and not amenable to any improvement in aggregate demand that might be generated with expansionary monetary policy.

An alternative view is that the long-term unemployed, and some of those who have exited the labor force, could be brought back into employment by particularly strong aggregate demand - what used to be called a "high pressure" economy.  This would be possible if the forces of hysteresis work in both directions, as this 1999 paper by Laurence Ball suggested.

That seemed to me to be what Janet Yellen was hinting at in her September speech at UMass-Amherst when she said:


Reducing slack along these other dimensions may involve a temporary decline in the unemployment rate somewhat below the level that is estimated to be consistent, in the longer run, with inflation stabilizing at 2 percent. For example, attracting discouraged workers back into the labor force may require a period of especially plentiful employment opportunities and strong hiring. Similarly, firms may be unwilling to restructure their operations to use more full-time workers until they encounter greater difficulty filling part-time positions. Beyond these considerations, a modest decline in the unemployment rate below its long-run level for a time would, by increasing resource utilization, also have the benefit of speeding the return to 2 percent inflation. Finally, albeit more speculatively, such an environment might help reverse some of the significant supply-side damage that appears to have occurred in recent years, thereby improving Americans' standard of living.

It seems to be that doing this would likely entail the Fed overshooting its 2% inflation target.  I have my doubts about their willingness to do this (and Yellen certainly did not suggest it).  And for it to work, inflation expectations would need to remain anchored (i.e., if any additional inflation just ratched up expectations, it would not bring unemployment down).
Labels: macroeconomics, monetary policy Links to this post 2 comments: