The British Pathe newsreel archive is now on youtube.  This is how they chronicled Britain's 1949 devaluation:

While floating exchange rates have day-to-day volatility, they don't provide the same drama as fixed exchange rates, which are prone to crises that are both political and economic.

The postwar Bretton Woods system fixed exchange rates with the dollar (and pegged the dollar to gold), but countries were allowed to make discrete changes in their parities.  Britain availed itself of  this in 1949 and 1967. 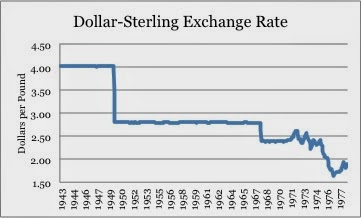 The Bretton Woods system ended in 1971 when the US announced that it would no longer redeem dollars for gold.

Sterling faced speculative pressure in the mid-1960's - "in a world of international finance, there is no sentiment; nations, whose currency is ailing must expect from the foreign dealers a kick in the moneybags"-

Which ultimately led to the 1967 devaluation:

Sterling crises were not unique to the Bretton Woods era.  Britain had left the gold standard in 1931 (after a very painful experience re-joining it in 1925).  In 1976, a plummeting pound led Britain to turn to the IMF for a loan, and, on "Black Wednesday" in 1992,  it was forced out of the European Monetary System.
Labels: exchange rates, history