Singapore has had the distinction of having prioritized social and economic equity while achieving very high rates of growth over the past 30 years — an example par excellence that inequality is not just a matter of social justice but of economic performance.

Finally, an example of a country that can walk and chew gum at the same time!  Oh, wait...

I'm not really that familiar with Singapore (aside from knowing you can't chew gum there), so I won't comment on the particulars, but its worth noting that the comparison Stiglitz makes of Singapore's growth record to that of the US is a little unfair because Singapore was once - not that long ago - a much poorer country than the US.  Standard growth theory predicts that low-income countries should "converge" (i.e., catch up) to higher income ones.  That means that they'll have higher growth rates. 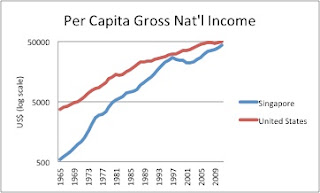 That said, many low income countries haven't managed to converge, so Singapore does stand out as a successful example which may provide some useful lessons.
Labels: growth, inequality Links to this post 2 comments:

Brad DeLong writes on the value of studying economic history:


Ten years ago I thought that my curiosity about and interest in the Great Depression was an antiquarian diversion from my day job of understanding the interaction of economic institutions, economic policies, and economic outcomes. The fact that we had gone through the Great Depression, had learned lessons from it, and had incorporated those lessons into our institutions and policy processes meant that there was little practical use to going over it once again. Boy, was I wrong. History may not repeat itself, but it certainly does rhyme—and nothing made an economist better-prepared and better-positioned to understand what happened to the world economy between 2007 and 2013 than a deep and comprehensive knowledge of the history of the Great Depression.

One of the most basic lessons from the 1930's, as well as the semi-regular banking panics of the 19th century, is the importance of preventing bank runs.  This can be accomplished by providing a mechanism, such as deposit insurance, that makes depositors confident that they will always be able to get their money out - therefore they won't feel an urgent need to take it out at the first sign of trouble.

Even though its been evident for a while that Europe, or at least its "leaders", seem determined to forget (or ignore) the lessons of economic history, what they're doing with Cyprus is rather stunning.  Neil Irwin writes:


It is a bad day to have your money deposited in a bank in the Mediterranean island nation of Cyprus. And it may just mean some bad days ahead for the rest of us.

Early Saturday, the nation reached an agreement with international lenders for bailout help. Part of the agreement: Bank depositors with more than 100,000 euros ($131,000) in their accounts will take a 9.9 percent haircut. Even those with less in savings will see their accounts reduced by 6.75 percent. That’s right: Anyone with money in a Cypriot bank will have significantly less money when the banks open for business Tuesday than they did on Friday. Cypriots have reacted with this perfectly rational reaction: lining up at ATM machines to try to get as much money out in the form of cash before the money they have in their accounts is reduced.

The Economist's "Schumpeter" blog further explains some of the ways in which this move is problematic:


The bail-out appears to move Europe further away from the institutional reforms that are needed to resolve the crisis once and for all. Rather than using the European Stability Mechanism to recapitalise banks, and thereby weaken the link between banks and their governments, the euro zone continues to equate bank bail-outs with sovereign bail-outs. As for debt mutualisation, after imposing losses on local depositors, the price of support from the rest of Europe is arguably costlier now than it ever has been.

It is also hard to square this outcome with the ongoing overhaul of finance. The direction of efforts to improve banks’ liquidity position is to encourage them to hold more deposits; the aim of bail-in legislation planned to come into force by 2018 is to make senior debt absorb losses in the event of a bank failure. The logic behind both of these reform initiatives is that bank deposits have two, contradictory properties. They are both sticky, because they are insured; and they are flighty, because they can be pulled instantly. So deposits are a good source of funding provided they never run. The Cyprus bail-out makes this confidence trick harder to pull off.

Prophecies of impending Euro-doom over the past several years have repeatedly been wrong (or premature, at least), but this doesn't look good.  How many hours until banks open in Spain?

Update: According to the FT, it was the IMF that had been pushing the idea of "depositor haircuts" - I'd thought they were a little more enlightened, but apparently not...